Ready to ship in May, the new L3Harris Falcon III® RF-7850D Multi-channel Modular System is the world’s first three-channel, triple-crossband radio in a third of the size of comparable solutions.

National defense organizations will soon have available a true hub for the connected battlefield network—a system that bridges legacy tactical waveforms to new and emerging ones, and links operators at the edge of the battlespace to decision-makers across the echelon with uninterrupted, resilient communications.

Smaller, more-powerful and with general capabilities and a waveform library far more extensive than current offerings on the market, the L3Harris Falcon III® RF-7850D Multi-channel Modular System is the world’s first triple-crossband radio, capable of operating from Very High Frequency (VHF) to S-Band.

REDUCED SIZE AND WEIGHT IN A POWERFUL RADIO 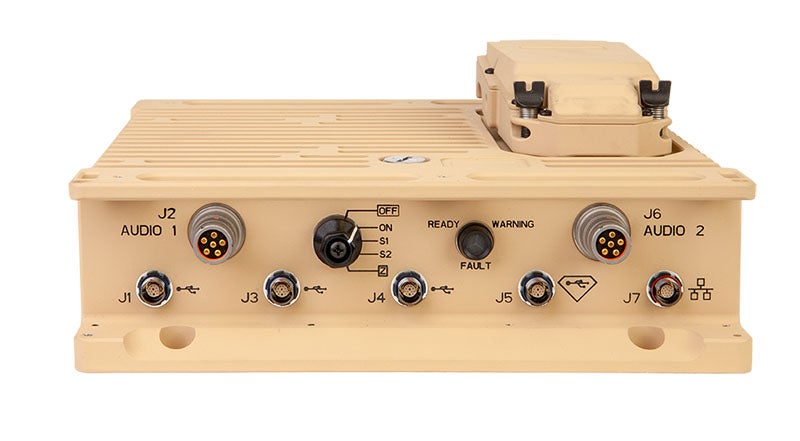 Roughly the size of a video gaming console, the RF-7850D is the smallest multi-channel modular system on the market with enough power to meet emerging interoperability and networking requirements in an ever-evolving operating environment.

Without a requirement for a shock rack or specialized mount, this low-Size, Weight and Power (SWaP) characteristic broadens its applicability for space-constrained vehicles and tight installation specifications.

The radio’s low-profile design allows for easy-to-install upgrades for any form factor radio. Further, the associated power amplifiers detach from the radio, facilitating a variety of configurations if space is a concern, Ian Young, L3Harris Product Line manager, said.

“For example, we were approached with a need for a drop-in upgrade for the existing fleet of legacy radios,” he said. “With the low profile of the RF-7850D, all we needed to incorporate were two L3Harris RF-410 power amplifiers with a lightweight rack for an easy-to-install, simple upgrade to meet the customer’s needs.”

Like the RF-7850D, the RF-410 Next Generation Power Amplifier was introduced at the International Defence Exhibition & Conference (IDEX) 2021 in Abu Dhabi in February. The NGPA has a software-defined architecture for fast upgrades to emerging and future waveforms and provides seamless access to networked voice and data, over the frequency range of 30-2600 MHz.

UNLEASHING THE ‘POWER OF 3’

L3Harris is leveraging mature and field-proven capabilities from the Falcon III RF-7850 family of radios to create a two-channel solution—with the flexibility to add an additional channel—in one compact system. Its first channel acts as the multiband backbone, providing the full RF-7850 waveform suite, with continuous coverage from 30 to 512 MHz, according to Young.

This first-of-its-kind approach effectively provides three simultaneous networks that can enable interoperability between generations of radio; three separate, non-competing channels; and all in a package three times smaller than comparable systems.

“The end user, on channel two, has a choice: they can either run another one of those channels, or they can push it up into the higher part of the spectrum for a more-data-centric application,” Young said.

The system operates up to 2.5 GHz, spanning four bands of the electromagnetic spectrum.

The system forms the nucleus of the RF-7850 family of tactical radios, delivering full battlespace interoperability and a bridge for air-to-ground backbone networks through long-range, dual-channel communications. The RF-7850D supports faster, better-informed decisions through the seamless exchange of voice, data, images and Full Motion Video up and down echelon.

“The RF-7850D is the center of the battlefield network.”

“It’s able to bring all the L3Harris Type 3 radios together and make them interoperable. We wanted to make it simple to configure the radio with a lot of different choices. We can tie into the rest of the echelons with our RF portfolio.”

“Out of the box, the RF-7850D is a two-channel modular radio, but you can extend its capabilities using the Mission Module,” Young said. “The Mission Module gives them more control on how they interface with the radio.”

“The options are endless,” Young said. “It gives us the opportunity to go out to our customers and find out what’s important to them, then bring that capability and make it extendable into the RF-7850D platform.”

During the product’s unveiling at IDEX earlier this year, several commanding officers were interested in the RF-7850D following a “highly successful demonstration” in the region, according to Tim Soine, L3Harris Product Management director.

Many attendees noted how they could leverage the triple-crossbanding technologies, according to Soine, including one who said, “We can have one channel running our command net, a second channel for air support and the third channel mission module connecting to the edge soldiers, but bridge all the position reports into the command net with no bridge device—this is what we have to have in the command vehicles.”

Those who visited the booth were also impressed with the customization options of the mission module capability and the streamlined design of the product, he added.

Much of the RF-7850D’s interoperability capabilities stem from the premier performance from legacy solutions within its family of radios, tailored for the two-channel solution.

“We worked with engineers to develop the radio with functionality similar to a personal cell phone,” Hall said. “Managing it becomes much more intuitive when seconds count.”

In addition to the WebUI, the family’s Shared Situational Awareness and Blue-force Tracking capabilities are expanded for two-channel operations in the RF-7850D with a built-in WPAN side adaptor for WiFi and Bluetooth connectivity, Hall said.

L3Harris runs the RF-7850D through the same suite of product testing as its predecessors, but it includes more-advanced Electromagnetic Interference and Compatibility activities, he said. “The further the military goes in its capability requirements, the more Electromagnetic Interference becomes a concern because of the amount of equipment that’s going into the vehicles,” Hall added.

Design engineers for the RF-7850D were also keen on developing common accessory interfaces for the radio and its counterparts. This is a trend Hall sees going forward for the company, as it lowers the cost for customers to transition to next-generation solutions within the radio family.

Work began in the start of 2018, when there was increasing market demand for an “international two-channel radio,” according to Soine. Soine and Hall were tasked with designing an L3Harris version that was as small and capable as possible.

The team, along with L3Harris International Sales personnel, met with customer stakeholders around the world and took their feedback to ensure the radio included key product requirements and specifications needed to make it a success.

For instance, one customer had focused his attentions on the Mission Module requirement; the customer related that if the system supported VHF/UHF channels with the added capability to connect secure personal radios through such a capability, it would be the “perfect solution” for their upcoming modernization effort, Soine said.

Following a week-long Kaizen between the RF-7850 Engineering team and sales, the final product was born— one that was three times smaller than the competition while providing three available channels and three simultaneous networks.