For the Integrated Tactical Network, the Future is Now

For the Integrated Tactical Network, the Future is Now

The U.S. Army is hard at work on a network modernization strategy, which the service says will lead to a force that is “ready to deploy, fight and win decisively against any adversary, anytime, anywhere, in a joint, multi-domain, high intensity conflict, while simultaneously deterring others and maintaining our ability to conduct irregular warfare.”

In order to achieve this strategic imperative, Army Futures Command officials say it is critically important for the service to implement an Integrated Tactical Network, or ITN, described as the “backbone of the Army’s main operations.”

The ITN concept leverages both Programs of Record and Commercial Off-The-Shelf components and transport capabilities.

THE CORE OF THE NETWORK

An operational test scheduled for January 2021 is the next major milestone toward ITN’s implementation. The test will evaluate the core of the concept–Handheld, Manpack and Small Form-Fit (HMS) radios.

Several L3Harris solutions, including the Falcon®IV AN/PRC-158 multi-channel manpack and the AN/PRC-163 multichannel handheld radio, are already Programs of Record that enhance the land service’s ability to reach its goal.

In recent and upcoming tests, L3Harris Technologies is demonstrating how some of these core capabilities can enable a communications network that bridges the divide between multidomain voice and data.

L3Harris radio networks leverage wideband capabilities to connect tactical asset voice, data and video together, and high-frequency and Satellite Communications to connect information for expedited decision-making and interoperability. Whether information is shared from manned or unmanned aerial assets, from soldiers on the ground or on the move, or from forward operating bases and central command locations, L3Harris is demonstrating how robust and resilient communications can be assured, jam-resistant and uninterrupted.

The name of the game is to enable “simplicity, resiliency and mobility,” L3Harris officials say.

Ken Harrison and Bill Seiss have had a front-row seat to the service’s modernization efforts and the exciting developments underway with the new U.S. Army Futures Command. As the local L3Harris Communication Systems representatives in Austin, Texas, they have been listening carefully to understand the warfighter’s needs and to ensure the command has a strong partner in L3Harris – one that can help bridge the capabilities gap between the current and future Army network.

The company is investing in products to address the Army’s goal to fight anytime, anywhere, according to Seiss.

“We’re looking at where the Army’s going and what their goals are for the network, and we’re incorporating those capabilities into our products,” he said.

L3Harris is including automation and machine learning into its networks and waveforms to make “smarter” radios that can automatically choose the best frequency in which to send information, according to Seiss.

The key benefit of the company’s offering is its use of multiple waveforms and channels in its radios, he said.

“One of the Army’s goals is to have multiple means to communicate in case one link goes down,” Seiss said. “These multi-channel radios provide SATCOM – including the new Mobile User Objective System – MANET networks and resilient waveforms all on one radio, providing the warfighter with multiple options.”

“The Army validates their requirements through experimentations and receives immediate feedback from industry to try to reduce the time from development to fielding, which was taking too long in the past,” Harrison said. “The Army is trying to build upon Programs of Record to go to the next level of development to provide greater capability for the network.”

In parallel to preparations for the test in January, L3Harris is participating in several Army initiatives to test the current state of related technologies to further enhance the ITN, including two Army demonstrations that concluded in the past month.

These combined efforts are “really about being able to penetrate and breach enemy defense systems so that we can have access into theater,” Jeff Smith, vice president of L3Harris Communication Systems Business Development, said. “Bringing in long-range fire, ground targets, air– fixed- and rotary-wing–at one time in the battlespace to give us the ability to breach enemy systems and get into the operating environment is part of the construct.”

Project Convergence is an annual “campaign of learning” to bring together the weapons and capabilities it envisions using in the 2030s and beyond in a seamlessly networked environment.

“To make [Artificial Intelligence, autonomous and robotic capabilities in the air and on ground] work in a digital environment, you have to have an underlying robust and resilient network, and you have to have a data architecture and the data and the talent to put all that together,” Army Futures Command Commander Gen. Mike Murray told Defense News in September 2020.

While this year’s experiment mainly focused on weapon systems, L3Harris brought network modernization solutions to the table, which company officials believe could serve as the backbone of the future system linking all the soldiers’ tools together.

As L3Harris prepares for a successful HMS demonstration in January, it continues to evolve its portfolio’s capabilities set to meet future demands.

The company is launching a new Small Form Factor single-change radio solution for the Army this year and continues to deliver Enhanced Night Vision Goggles - Binocular and Satellite Communications capabilities to the service. Combined, SFF and ENVG-B work harmoniously to create a complete situational awareness system for ground troops, according to company officials.

Additionally, there are a several demonstrations in the next few months using L3Harris meshed SATCOM services that the Army is looking to integrate into the ITN as the land service continues to evaluate the system’s requirements.

The L3Harris team is listening closely to its Army customers to understand their mission needs as they operate across all warfighting domains, and to provide affordable solutions that will be required of the near-term and future integrated network.

L3Harris officials envision the company’s network modernization solutions as the backbone of a future system linking all the soldier’s tools together. Soldiers in the field can receive information from downrange aerial ISR via a link through manned aircraft. Tactical assets can also report back to Forward Operating Bases all in one integrated network. 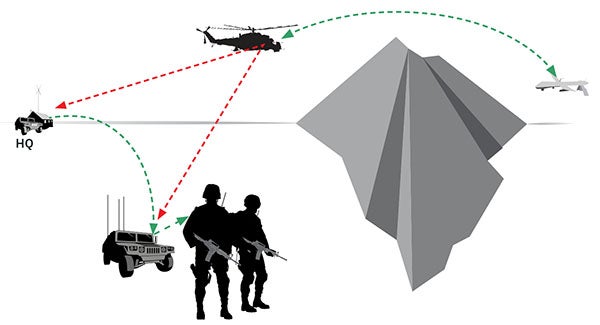