What Is “Intuitive Haptic Control” and Why Do You Need It?

What Is “Intuitive Haptic Control” and Why Do You Need It?

In an era where the battlespace is becoming increasingly unpredictable, the role of robots in keeping people safe has never been more important. Often called upon to do the difficult tasks that put military personnel in danger, robots are frequently harnessed for a broad range of complex missions, from the discovery and disposal of improvised explosive devices (IEDs) to the clean-up of hazardous waste materials. They are pivotal in ensuring the protection of service people and first responders all over the globe.

While robots enable this critical degree of protection, many robotic systems do not offer a sufficient degree of precision, leveraging only basic joysticks or controllers that resemble gamepads. The main challenge these types of simple controllers present is that they do not provide any means of physical feedback to allow the operator to experience what the robot is interacting with. The robot can therefore prove difficult to manipulate and manoeuvre, leading to increased task completion time, greater number of errors, and a whole lot of frustrated operators. We compare this sensation to having numb fingers in winter and trying to tie your shoes. Without being able to feel what you’re doing, a lot of guesswork is often required, meaning a large reliance on mental mapping just to get the job done. This creates a massive strain on already stretched resources. 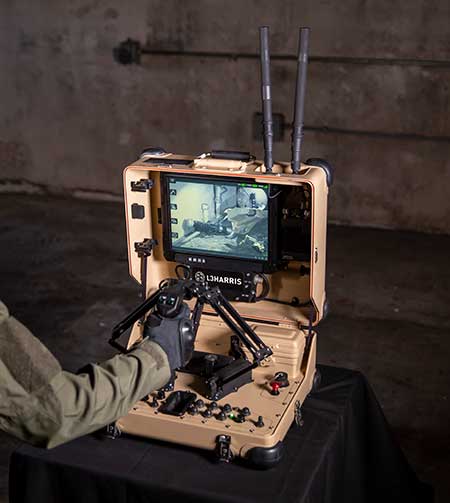 One of the key differences intuitive control offers above and beyond those simple joysticks or game-like controllers is that it allows the user to move their hand and have the robot accurately mimic that movement. Put simply, it moves exactly how your hand moves. This is invaluable for missions that require human-like dexterity and massively improves mission effectiveness.

However, the control advantages don’t stop there. It provides true haptics with tactile, kinaesthetic feedback, enabling an operator to physically feel and experience what the robot is interacting with, as if the operator was doing the task themself. Importantly, true haptics goes beyond the simple buzzing of a phone or the vibrations given off by certain gamepads – if you use an intuitive haptic controller to push a robot’s gripper into an object, the controller pushes back.

Why Intuitive Haptic Control Matters to Your Mission

This combination of haptics and intuitive motion control enables the operator to have the most realistic experience possible while staying out of harm’s way, leading to several significant benefits:

While basic robotic controllers allow you to complete a certain number of basic tasks, intuitive haptic control unlocks a much longer list of possible capabilities. Having a greater degree of control over your robots means complex tasks such as unzipping backpacks or opening doors suddenly become that much easier. What’s more, increased precision leads to better aim, resulting in more accurate firing of disruptors both at short-range and at a distance. Importantly, challenging missions that involve handling chemical or biological threats in cluttered indoor environments can be completed seamlessly, thanks to vastly improved manipulation.

The human-like dexterity made possible by intuitive haptic control enables operators to complete tasks previously unachievable by more traditional robotic systems, meaning the risk to personnel is massively reduced. As robots begin to do more, humans need to do less, and so don’t have to put their lives on the line as often during dangerous missions. What’s more, by providing the capability to fully mitigate threats remotely, it dramatically reduces the number of times an operator needs to manually approach a live device.

It almost goes without saying that with increased precision comes reduced task completion time. This has been proven by our own robotics technology, with our intuitive haptic control system having been independently verified by the U.S. Army Research Laboratory (ARL) in human factors testing. The ARL concluded that “100% of the users indicating it either somewhat improved or greatly improved their overall mission performance,” and on average “reduced completion time by 20.2% and reduced operator workload by 18.6%” when compared to a standard controller. This is a substantial improvement in performance, and demonstrates the important difference haptics and intuitive control can make to a mission.

The ease of using an intuitive haptic controller also minimises training time and greatly improves long-term skills retention. Where basic controllers tend to consist of multiple buttons, levers, or joysticks that are each responsible for a different part of the robot’s movement, an intuitive haptic controller offers a modern, easy-to-digest interface, significantly reducing cognitive burden and making training that much simpler. In fact, our own T7 robot is a fantastic example of this. During a mock mission scenario we conducted a few years ago, we were given a single day to train personnel to use the T7. A whole two years later, one of the operators from that day was given control of a T7 and remembered exactly how to operate it.

When it comes down to it, haptics and intuitive control offers unparalleled accuracy, dexterity, and precision that enables operators to complete complex tasks remotely, rapidly, and safely. Our T7 and T4 robots share a unique intuitive haptic controller for this very reason, streamlining operation, minimising training time, and maximising mission effectiveness.

L3Harris Haptics Harnessed Across the Globe

Our haptics technology is already being harnessed by the UK Ministry of Defence (MoD) in the form of 122 T7 robots that have replaced their fleet in service since 1995, and has more recently caught the attention of the U.S. Air Force. As a result, we have been awarded a 10-year, $85-million, IDIQ contract to produce up to 170 T7 robots, with initial deliveries scheduled for 2022. The T7 received “outstanding” ratings from the Air Force in both technical capability and usability categories; a testament to the success of our intuitive haptic controller.