“The advent of wideband Low-Earth Orbit Satellite Communications brings a revolutionary change to the warfighter’s connectivity,” Ron Fehlen, L3Harris vice president and general manager of Air Force and Advanced UAS programs, said. “Data rates can go up from 2 or 3 megabits per second to over 100 Mbps – and even exceeding a gigabit per second. Access into LEO also brings increased transport diversity in an electronic warfare fight.”

This comes at a time when the U.S. Defense Department is investing resources to modernize its communications networks by adding resiliency, capacity and convergence and enabling multi-domain operations against any adversary.

“Signal pathway diversity is one of the most-critical elements to a resilient network, especially in congested or contested network environments,” said Lt. Col. Natashia Coleman, product lead for Unified Network Capabilities and Integration, Program Executive Office Command, Control, Communications-Tactical (PEO C3T), in a service statement. “Having that ability to leverage SATCOM in multiple constellations and orbits, seamlessly to the user, gives us more routing choices to enable uninterrupted data exchange on the battlefield.”

The incorporation of commercial resources into tactical networks is increasingly appealing due to the sheer number of such satellite assets in orbit as well as the common standards, formats and translators many employ to enable interoperability. The DEUCSI approach is to develop terminals that connect all the battlefield information from disparate sources and orbits to single hubs to produce actionable intelligence. 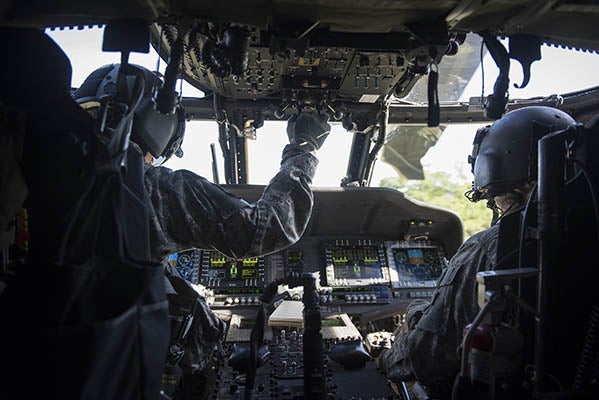 For this 18-month experiment, the USAF SDPE office and Army PEO Aviation selected L3Harris and its partners, SpaceX and antenna providers Battelle and Ball, to determine the effectiveness of commercial space Internet connections when transmitting beneath or through a spinning helicopter rotor.

Overcoming obstructions, such as trees, is a general communications challenge, but transmitting and maintaining a connection through a spinning rotor adds a unique element, because it acts like a “spinning tree,” Miguel Apezteguia, L3Harris senior manager of Program Management, said.

Further, due to the size of rotary-wing airframes, a key AFRL parameter is maintaining as small a profile as possible while still offering power necessary for the system’s antenna to establish and maintain LEO SATCOM connections via Electronically Steerable Arrays, according to Apezteguia.

L3Harris is leveraging more than 10 years’ experience supporting rotary-wing communications for the AH-64 Apache program, including long-range communications from the Long Bow Block III, Video from Unmanned Aircraft for Interoperability Teaming (VUIT) and Manned-Unmanned Teaming (MUMT) solutions. The company has proven success on previous DEUCSI experiments and is actively working other experiments with SpaceX and other key partners.

“The ability to leverage commercial technology and quickly modify it for military applications is critical to the future of Department of Defense tactical and strategic communications,” Tom Kirkland, L3Harris vice president and general manager of Army and SOCOM programs, said. “It offers the ability to access high-bandwidth satellite networks on-the-move on multiple platforms.”

“This effort will pave the way for superior communications and the utilization of advanced commercial technology for our warfighters,” Fehlen said. “This has the potential to increase data rates by an order of magnitude from where they are today. New commercial SATCOM architectures will also provide more-resilient communications.”

The DEUCSI program outlined six use cases pertaining to multiple scenarios within the U.S. Defense Department. Experiments for each use case are funded based on applicable customer need and funding.

“In the long view across the military, there’s a huge market for adding commercial satellite capability to military communications,” Apezteguia said.

The proliferation of LEO constellations is transformative in military SATCOM operations going forward. However, Apezteguia said, the systems are proprietary, and the DOD and military contractors will need to work with each of the constellation providers to leverage the advantages their respective solutions provide.

That’s where the L3Harris field-proven expertise in innovating for the warfighter comes in.

The company’s vision is to establish a family of SATCOM assets that are interoperable with commercial systems as they come online. Integrating the capabilities of multiple companies into a single solution avoids “vendor lock” for government customers and provides enhanced resiliency, according to Kirkland. The resulting diversity of orbits, constellations and frequencies, combined with protection and encryption from L3Harris, adds flexibility in military operations and provides “resiliency in all of its forms.”

In addition, L3Harris knows the challenges of molding commercial solutions into ones that work for the military.

“While the constellation providers are primarily focused on the consumer market, we bring the working DOD experience of platform integration and customization—as well as extending it to the tactical edge—and by leveraging the military’s existing base, these new capabilities become ‘force multipliers,’” Apezteguia said.

In other pursuits, the Defense Department is interested in the low-cost, high-throughput and low-latency benefits provided by the Commercial Space Internet constellations and the potential application to DOD platforms. A key aspect for the U.S. Air Force customer for that effort is link diversity and creating path-agnostic BLOS communications.

“There have been historical interoperability issues with disparate systems not being able to communicate, so this could be a common denominator that resolves a lot of interoperability problems and allows the DOD to efficiently share large amounts of data across various services and platforms,” Kirkland said.

Proving the feasibility of commercial SATCOM on rotary-wing aircraft presents L3Harris with the potential of leveraging the capability in other high-priority military programs, including the U.S. Army’s Future Long-Range Assault Aircraft (FLRAA) and Future Attack Reconnaissance Aircraft (FARA) programs.

It’s an exciting prospect to strengthen warfighter communication options across the spectrum, according to Apezteguia: “This effort can also pave the way to bring LEO communications to warfighters on the ground, both mounted and dismounted.”