Users of tactical and mission-critical solutions at the front lines of danger demand reliability of their equipment every time they need to use it. L3Harris Technologies’ relentless commitment to quality at the source and operational excellence is leading its journey toward a factory floor with capabilities as advanced as those it provides for the warfighters and first responders who protect our way of life.

Just as augmented reality overlays can reduce soldier workload by providing on-demand situational awareness in a heads-up display, the technology likewise eases the demands on manufacturing employees building the tactical equipment that will be sent to the field. 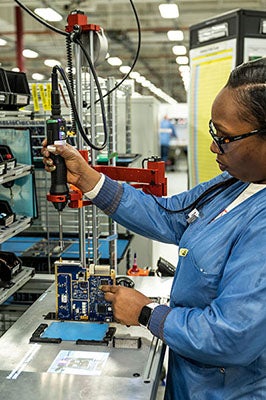 L3Harris began investing in augmented reality for manufacturing processes in the fall of 2020, according to Ryan Esse, L3Harris senior principal Manufacturing engineer. The company’s Amityville and Rochester, New York, locations were the first to incorporate the LightGuide augmented reality software platform into their processes.

LightGuide provides process instructions and visual cues and alerts via images and video projected onto the workstation. The system uses infrared and 3D sensing to know where an operator’s hand is within an inch in any direction, according to Fran Branco, L3Harris Manufacturing Engineering manager. The cues highlighting what pieces go where allow operators to focus on the task at hand, not where they are in the process; further, the system will notify the operator via visual cues and messaging and stop instruction if they skip a step or reach for the wrong component.

The Rochester site’s operations center launched four pilot programs using the platform in separate manufacturing lines, which were selected specifically because of their complexities and the differences between their processes and tasks. This allows the company to test the true breadth of LightGuide’s capability to identify how far it can expand throughout operations, according to Esse.

The system’s general benefit is taking paper-based or on-screen work instructions and integrating them real-time into the process with augmented reality, he added; this reduces the reliance on operator memory – also known as “cognitive ergonomics” – effectively turning a complex process with multiple steps into a series of simple processes with single steps.

One line piloting the solution has 17 different variants of one product built on one station. The implementation of LightGuide facilitated the consolidation of parts at the station, eliminating changeover per variant, because the system identifies what variant is on the line and what components it needs when the operator scans in its bar code. Since implementation in July 2021, there have been zero assembly-related defects at that station compared to nine in the previous seven months. 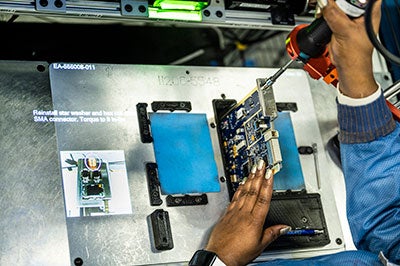 The company has continued to incorporate LightGuide in additional manufacturing locations since the inception of the pilot programs, including L3Harris Integrated Vision Solutions business’ Londonderry, New Hampshire, site. The next L3Harris Communication Systems facility to incorporate the system will be the Tempe, Arizona, location, according to Esse.

L3Harris’ Tactical Communications business in Rochester plans to expand the use of the system across entire lines. One upcoming line has 38 different product variants, according to Branco, and LightGuide will support the analysis necessary to optimize the line’s throughput and staffing to meet its production schedule. LightGuide will also capture build quality data from torque drivers to ensure the correct torques and patterns were used during the manufacturing process, Branco said.

“LightGuide has been a great asset for us,” Branco said. “They’ve helped us understand our process better, and even help streamline it by asking the right questions about our order of operations when incorporating the system into our processes. Now, we’re going to see how far we can push the technology.”