The dedicated repair shops were established to improve lead times in getting damaged equipment back in the field through streamlined procurement and test processes.

“The intent of these organic depots is to make them crisis-proof,” Neal Graff, L3Harris Program Management lead, said. “We’ve put together critical spares on the shelf so that we’re not beholden to sub-tier contractor timelines and have time and cushion to procure replacements of replacements.”

The establishment of the depots, as well as new logistical and contract arrangements between L3Harris, the prime contractor and the Sponsored Programs Office at Wright-Patterson Air Force Base, Ohio, has already reduced repair turnaround times by 70 percent, according to Graff. The foresight in “crisis-proofing” the depots also allowed the teams to mitigate a number of pandemic-related supply chain impacts.

“For the team to be consistently shipping within 30 days with an over-90-percent certainty rate is an enormous accomplishment as a combined team,” he said. 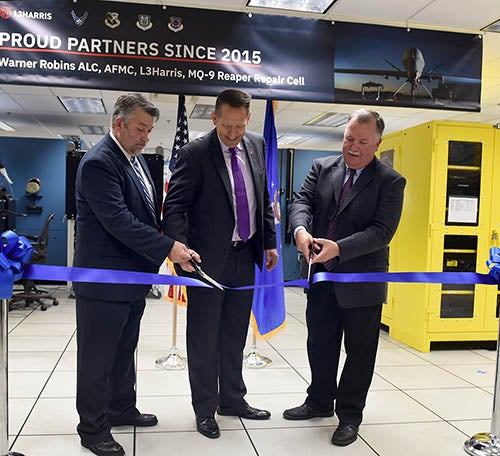 L3Harris provides various antennas and modem assemblies – both in the aircraft and in the ground terminals – for the MQ-1 Predator and MQ-9 Reaper programs. When equipment is damaged in the field, it is sent back to the prime contractor, which then typically sends the parts to L3Harris for repair and operational assurance testing.

“We could not execute our mission without the support of partners like L3Harris Technologies,” Tobyhanna Army Depot Commander Col. Daniel L. Horn said during the Army base’s ribbon-cutting event.

The U.S. Department of Defense has a congressional mandate to ensure no less than 50 percent of its acquisition funding is spent for its own personnel to perform repairs on the program, in case the original equipment manufacturer is unavailable. As such, L3Harris created teaming arrangements for component repair with Warner Robins Air Logistical Complex, Georgia, and Tobyhanna Army Depot, Pennsylvania, in 2015 and 2022, respectively.

“The majority of the program was developing the ability for the depots’ versatile diagnostics and automated test station to independently test various line replacement units, shop-replaceable units and circuit card assemblies without requiring direct L3Harris support,” Bill Pendleton, L3Harris senior Program Management associate, said, noting part of the depot installations was the provision of computer-based training, test readiness documents detailing what, how, when and how long to test specific components and “train the trainer” events to establish on-site, uniformed test subject matter experts. 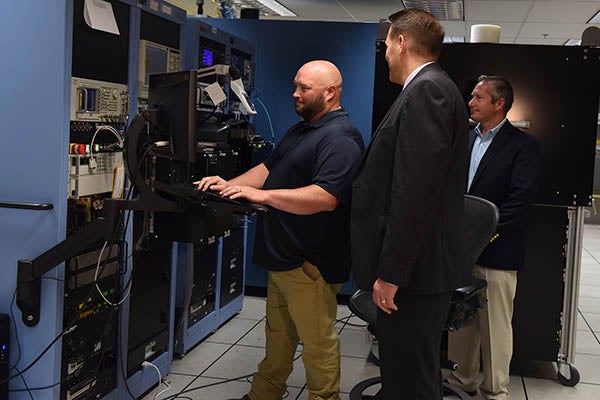 L3Harris furnishes the depots with the exact same equipment the company uses in its facilities, from the thermal chambers, ball grid array replacement stations and X-ray stations, according to Pendleton.
Further, L3Harris secured at least one year’s worth of spares to ensure personnel have everything they need for operational success.

“There was a lot of thought put in during the early induction and logistical support analysis phases – a lot of the analysis for candidates, spares and what was needed to start this organic depot activation program,” Pendleton said. “This was done before and during program to assure success.”

L3Harris and Wright-Patterson Air Force Base are currently evaluating candidates for the next organic depot activation, as a follow-on to the existing contract, to extend the depots’ capabilities. The company is also deploying depot site representatives, responsible for managing stock and ensuring the sites have the spares they need when they need them.