A Proper Send-off for the RAF 39 Squadron

A Proper Send-off for the RAF 39 Squadron

39 Squadron, which formed in 1916 and transitioned into MQ-9 Reaper unmanned aerial systems missions in 2007, officially retired as a squadron this summer. The squadron's mission continues with 13 Squadron, based in England. L3Harris will continue to support the RAF both during the transition from the Reaper to MQ9B Protectors and after the transition is successfully executed.

“We support the satellite communications connectivity between the ground control stations and the RAF’s Reaper aircraft as they fly in locations around the globe,” said Erik Drake, L3Harris senior Business Development principal, noting the company’s role is enabling the system’s remote split operations, which is key to connecting operators to the aircraft performing combat air patrols. “This is a very complex system of equipment across very diverse locations. We support most of those locations with field service representatives who have the expertise for day-to-day operations as well as modernization efforts.” 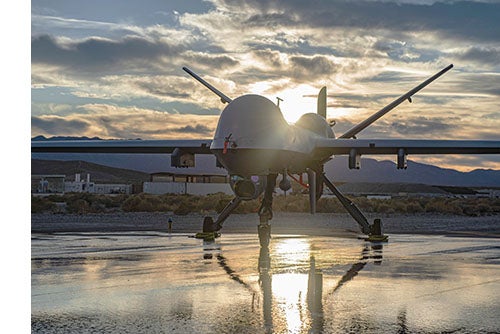 The RAF initially worked with the U.S. Air Force using embedded aircrew before procuring the equipment and gaining the experience necessary to stand up 39 Squadron. This occurred in 2007 according to Bryan McFalls, L3Harris senior Field Engineering specialist, who has supported the RAF Reaper mission at Creech for the last six years. L3Harris has been part of 39 Squadron’s mission since its inception.

39 Squadron maintained three ground stations out of Creech for missions in the Middle East theater, which will now transition to RAF’s 54 Squadron. L3Harris provides 24/7 support of operations.

“39 Squadron has been by far the best customer I’ve ever worked with,” said McFalls. “The RAF is extremely embracing of their contractors and creates a very inclusive environment amongst the entire mission team.”

Due to operational security restrictions, L3Harris is not able to divulge all technical information about the capabilities the company provides the RAF, added McFalls, which requires a strong level of trust between the contractor and air force to assure mission-readiness of the UAS for operators.

“We built the equipment for the datalink on the airplane – our links have been on all MQ variants since 1996,” said McFalls. “Our role as product developer and systems integrator offers the best position to support link operation and management, as well as network trouble-shooting, maintenance and repair.”

“Now that 39 has retired, we will support 54 Squadron with the same level of support we maintained over the course of our involvement with their predecessor’s mission,” said McFalls.

During the retirement ceremony, L3Harris sponsored the 39 Squadron Integrator Award. The award is given annually to the squadron member who, in the eyes of the commander, best embodies the principles of unity, teamwork and selflessness in delivery of the squadron’s mission.

This year’s award winner received the recognition for being “a force of nature when it comes to uniting a work force.” As an authorizer, the recipient “made difficult choices in good humor and could be relied upon to lift the room no matter the task,” according to remarks during the event hosted by 39 Squadron’s final Officer Commanding, Wing Commander Fred Wigglesworth.

“The RAF’s Remotely Piloted Aircraft Sensor capability is built on the Whole Force concept,” said Wigglesworth. “This means that contract support and Field Service Reps are as critical to operational output as the military crews themselves. L3Harris has proven to be a dependable, committed and battle-proven partner, which has enabled every minute of 39 Squadron’s 90,000 hours of operational flying.”