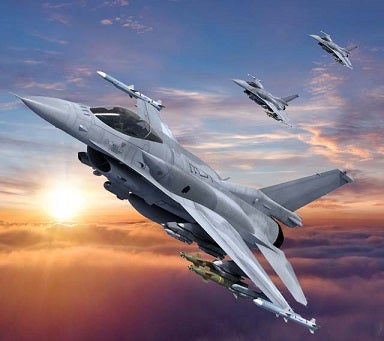 “We are creating a virtual electronic shield around the aircraft,” said L3Harris Viper Shield Program Manager Chris Lazzari. “Addressing self-protection against emerging and future threats is at Viper Shield’s core, and we have made it even more effective for a longer period of time.”

Viper Shield will feature lower lifecycle costs and easier future upgrades to keep advanced F-16s protected for many years into the future. It has fewer critical components than previous EW systems, leading to more mean time between failure in addition to smaller form factor and reduced weight. It uses commercial off-the-shelf and software-defined technology, which will ease future modernization.

How did L3Harris come up with all this innovation in one package? It’s the result of more than six decades of EW leadership and more than 30 years of providing systems on the F-16 airframe. Air forces across the world use L3Harris technology to protect their F-16s, and several allied nations have already committed to Viper Shield based on its advanced technology and affordability.