The year is 2027, and a U.S. Army unit has been tasked to seize a foothold in a dense urban environment.

Although theoretical, this operational vignette illustrates just some of benefits the U.S. Army expects from the Joint All Domain Command and Control (JADC2) – the U.S. Department of Defense’s concept to converge multi-domain network platforms, sensors and personnel into a single operating environment.

And U.S. Department of Defense acquisition officials are pushing to transition JADC2 from concept to operational as quickly as possible.

“We’re seeing feasibility of connecting across the joint force using current systems and future systems,” Doug Bush, assistant secretary of the Army for acquisition, logistics and technology said at a National Defense Industrial Association symposium in July. “Scale is really important, taking it to the next level to actually understand what the network could support in a contested environment.”

The Army is just beginning its radio fleet modernization journey, and the service is limited in how fast it can deploy next-generation assets by where it can and needs to allocate its budget.

One of the land service’s most notable annual JADC2-targeted exercise is Project Convergence, a “discovery experiment” comprising a series of demonstrations showcasing innovations that accelerate speed, range and decision dominance of soldiers to achieve overmatch and the service’s vision for the total Army to be a multidomain force by 2035.

L3Harris has increased its participation in Project Convergence since the inaugural event in 2020.

The Army plans to enhance the complexity of the scenarios each year, to include more partner services and allied forces and various mission environments. The company in turn has bolstered the number of capabilities it provides for the demonstration each year to meet the demands of the specific challenges and to introduce new technology.

This has provided the Army the opportunity to review more options for multi-domain communications and intelligence transport that can meet their needs and budget.

MULTI-DOMAIN OPERATIONS: PERSPECTIVE FROM THE GROUND 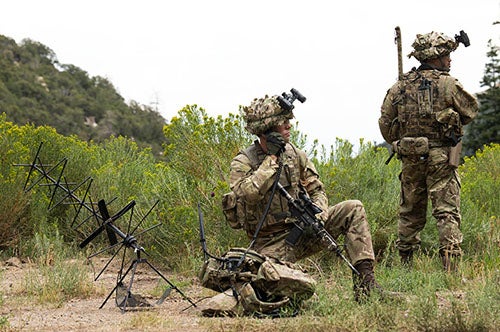 Underpinned by flexible network architectures and cloud computing, JADC2 and Multi-Domain Operations (MDO) enable every element of a joint force to move huge amounts of data around the battlespace securely, resiliently and at pace.

L3Harris Technologies is already supporting multiple Army tactical communications modernization efforts in support of the DOD’s objective for “integrated deterrence” in the age of strategic competition.

“Fully embracing multi-domain operations gives the Army the ability to operate faster than a peer adversary,” Jeff Smith, L3Harris vice president of Business Development, said. “Whatever effect we want to bring to bear, we must collect and process information, make decisions on it, choose an effect, and execute the effect all much faster than a peer adversary. The ongoing Project Convergence exercises provide further insights to expedite this capability’s delivery.”

“The fundamental premise of military operations is ‘shoot, move, communicate, execute on the target and move again if necessary,’ because you've compromised your position – this is actually the same premise as JADC2 and MDO, and you have to execute very fast and understand your RF signature or risk being targeted faster,” Harrison said. “Lessons learned from Ukraine clearly illustrate this.”

“This is where you really get an idea of the whole picture that identifies the company's end-to-end role in JADC2 and how each piece fits together,” Smith said. “Identifying each of these pieces and how they fit together is the most important thing.”

However, as DOD seeks to roll out its JADC2 concept, it also faces something of a dilemma, Smith said: "Does it decide to move large amounts of data, which can be jammed or tracked, or deploy a better, protected network that shares data at a much slower pace? A network presenting hundreds of megabits of data can get you shot, because it’s been tracked by a peer adversary – is that useful?”

But, by the same token, he continued, if an anti-jamming network does not move data fast enough for Artificial Intelligence to make intelligent, targeting decisions, is that effective? There is no “turnkey solution,” and the combination of fast and resilient networks has yet to come to fruition.

One of the most-prevalent gaps facing the successful implementation of multi-domain operations is line-of-sight networking across the 100-mile zone that comprises the tactical edge, according to Smith. This is where the interconnection between sensors and soldiers is critical for real-time decision making.

In response, L3Harris is already successfully demonstrating capabilities in line with the ultimate vision of JADC2, including delivery of data right up to the tactical edge, allowing warfighters to make decisions faster than peer adversaries.

“We're going to continue to enhance resilient, multi-function network communications by bringing more flexibility, more anti-jam and AI/ML into the equation,” Smith said. “The expectation of our customers is that the software-upgradeable capability they're buying will get them on the glide path to being JADC2-capable.”

L3Harris’ broad portfolio of software-defined radios, from the AN/PRC-163 -167 and -171 radios to the exportable RF-7850 radio, delivers seamless transition to new capabilities, including on-the-fly incorporation of a wide portfolio of specialist waveforms and machine-learning algorithms, all which enable MDO.

“True joint-force collaboration requires integrating a wide variety of hardware and software into a single network,” Smith said. “Artificial Intelligence and Machine-Learning technologies speed the data delivery within the cohesive JADC2 network, and L3Harris is working across all the business divisions to deliver that capability.”

“JADC2 and multi-domain operations are complete rethinks of how we execute intelligence collection, tactical movements, tactics and procedures, and communication efforts,” Smith said. “Every week, there's activity moving toward the ‘billion-dollar question’ that is ‘what exactly do we truly mean by JADC2?'”

Project Convergence represents one effort in a “continual set of small and big actions” that are helping shape that answer, he added. Over the next three or so years, the U.S. military will pinpoint the right balance between tactical communications speed and resilience that will lead to mission success.

“Armed forces need to have both,” Smith said. “That lands you in a place where you talk about cognitive, hyper-intelligent communications networks that conduct intelligent routing and transition between covert and high-throughput networks, which can adapt in real time. That’s where we are in the MDO market.”