The James Webb Space Telescope is a space-based observatory that provides unprecedented images of the universe’s first stars and galaxies.

L3Harris played an important role in the assembly, integration and testing of the telescope.

See the latest images from the James Webb Space Telescope

As part of the NASA team, L3Harris integrated components made by various partners to form the Optical Telescope Element, collects light and provides sharp images of deep space. L3Harris also combined the components of the Integrated Science Instrument Module, which hosts four cameras and spectrographs for gathering data. L3Harris later administered about 100 days of testing in a cryogenic vacuum chamber at Johnson Space Center to ensure the telescope elements perform correctly in the harsh environment found in space.

As the successor to the Hubble Space Telescope, Webb launched in December of 2021 and took about a month to travel 1.5 million kilometers (940,000 miles) to a point in space where it is balanced between the gravity of the Earth and the sun. Webb is a large, infrared-optimized telescope designed to study the formation of the first stars and galaxies, the evolution of galaxies, the production of elements by stars and the process of star and planet formation. Webb is located much farther from Earth than Hubble and contains a tennis-court-sized sun shade that keeps the telescope cold, which is necessary for viewing infrared light. Webb was carried into orbit aboard an Ariane 5 launch vehicle.

Diameter of primary mirror is approximately 6.5 meters, or 21.3 feet

Primary mirror segments are made of beryllium and coated with gold

1,000 times more sensitive in the infrared spectrum than Hubble

The overall weight of the telescope is significantly lighter than Hubble due to ultra-thin, ultra-lightweight mirror segments

This week NASA released the first images from the James Webb Space Telescope, giving new insights into the universe and the deepest look humanity has ever seen. These were made possible in part by L3Harris engineers and scientists.

Members of our James Webb Space Telescope team share thoughts and memories from working on a truly memorable program. Watch to learn more. 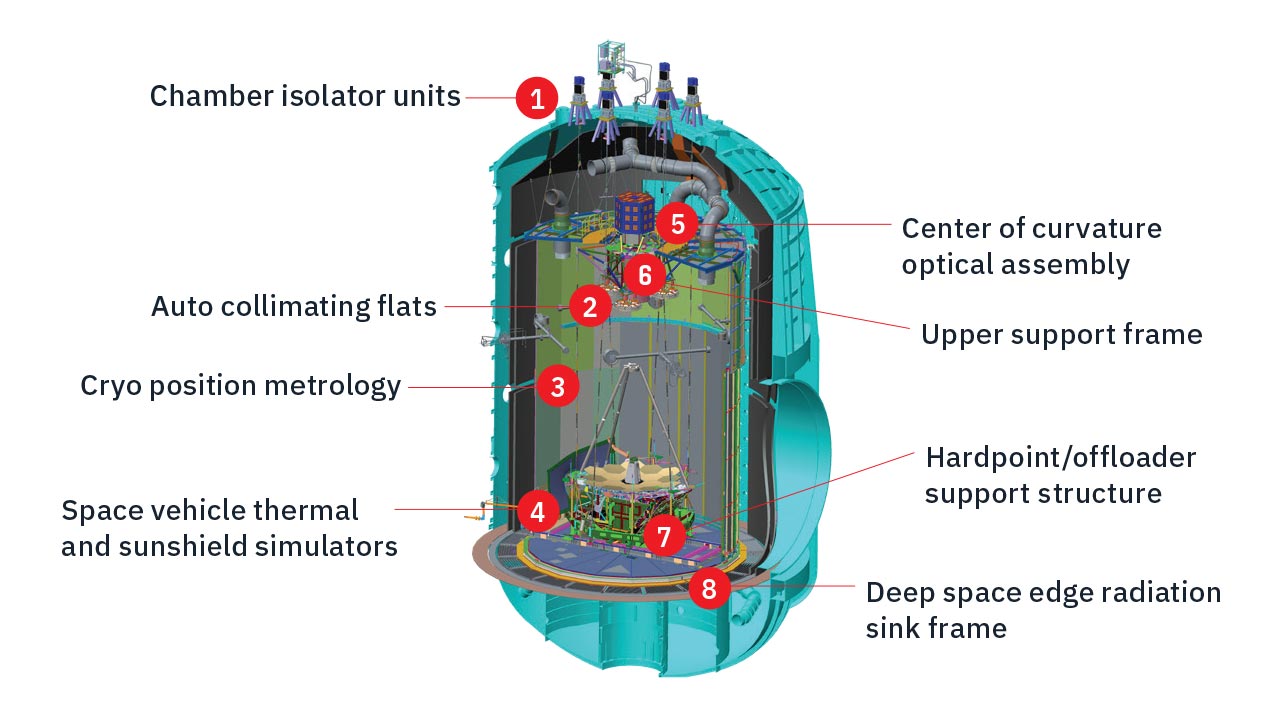 Three, 1.5-meter (60-inch) mirrors provide the ability to test the end-to-end performance of the telescope and instrument suite. Each flat can be tipped and tilted as needed.

Optical test system used to ensure that all 18 primary mirror segments can be aligned and work together properly as one large mirror. Multi-wavelength interferometer allows the primary mirror to be phased and figure corrected using the flight mirror actuators.

Supports the optical equipment inside the cryogenic environment. Serves as metrology base for the optical test equipment and the flight system.