SEE OUR NEARLY 50 YEARS OF EXCELLENCE

L3Harris’ advanced reactor and thermal-hydraulic models unlock maximum fidelity and performance from your simulator. The models are based on first principles and advanced numerical techniques, and are extensively proven with installations worldwide.

Comet™ and Comet Plus™ are advanced models for the simulation of reactor neutron kinetics based on a rigorous application of first principle physics and advanced numerical techniques.

Comet™, primarily applied to the simulation of heavy water reactors (PHWRs), solves diffusion equations by using the Mesh-Centered Finite Difference (MCFD) method modified by the application of the Generalized Equivalence Theory in the calculation of homogenized parameters.

Both Comet™ and Comet Plus™ are true three-dimensional models. A minimum of one radial node per fuel assembly/channel is used. The neutron diffusion equations are solved at each node at each time step without relying on approximate methods based on a space-time factorization.

Control rods are treated as individual entities and shadowing effects are fully simulated. Variable enrichment fuel and other modern fuel designs can be accounted for.

The calculation of the flux at the in-core detector locations is achieved by reconstructing the flux, as a function of the local nuclear properties, in the nodes where detectors are present. Very localized effects, such as the effect of movements of neighboring rods on detector responses, are fully simulated. 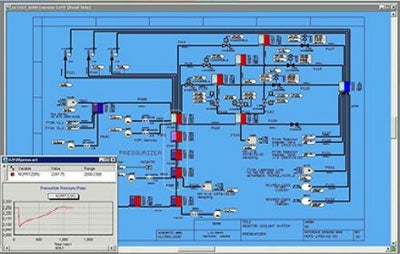 L3Harris' advanced thermal-hydraulic model (ANTHEM™) is based on a rigorous application of the equations of mass, momentum, and energy conservation and implicit numerical techniques. ANTHEM has been successfully installed and validated on numerous simulators and simulator upgrades currently certified for training.

ANTHEM™ has been specifically designed to ensure faithful real-time simulation of both single and two-phase flow under all plant operating conditions. The model accurately simulates:

ANTHEM™ is a non-equilibrium, non-homogeneous, drift flux model. The conservation equations consist of three mass conservation equations for liquid, water vapor and non-condensables, two energy equations for liquid and gas mixture and the momentum equation for the liquid gas mixture. The mass and energy equations are solved at each node and the momentum equation is solved at each link. The drift flux model is used to resolve gas and liquid velocities from the mixture momentum equation. Nodalization is determined by system geometry and fidelity requirements and is not compromised by either calculation cost or stability constraints. An implicit numerical technique is used to ensure stable response under all conditions.

ANTHEM™ has been proven successfully on nuclear and fossil-fueled plant simulators worldwide.

L3Harris has always been known for delivering high-quality simulators. With the Orchid® product suite, L3Harris continues this tradition with a complete, cutting-edge simulation software environment.